So, curtain ideas are down… now I’m thinking about the Film section.

By using After Effects and a projector i can effectively make one projection a multi-channel installation! Whoo hoo! Plus I’ve been thinking about the vaseline covered screen – photographers and filmmakers have used myriad means of softening light – the use of silk bridal veils over the camera in ‘Picnic at Hanging Rock’ spawned ten years worth of timotei commercials, and this really gives me a chance to try out other filters. Another thought was that of framing – I’d played with the idea of screen printing my tattoo design onto the fabric, but the garment and positioning put me off that idea. However, i could get window-stickers made up of actual frames to emphasise the edges, and one of those frames could be loosely based on my tattoo design… so sketchbooks… 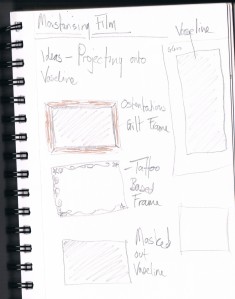 So, using AE means I can dispense with the traditional square format, which would be interesting.

Incidentally I was searching the net looking for similar projects, and was struck by this sculpture by Susan Bowman:

So, now i need to deal with the planning element – I’m intending to combine the filming with some light therapy. there will be three filming sessions, one before i go anywhere near a tanning booth, one after a week of using the sunbeds, and another one after two weeks. It’ll also be interesting to see how much of a difference to my skin it’ll make. There’s also a little bit of me that hopes after doing this massive dermatitis-based project i might kick-start some psychological thing that’ll help it clear up… about as likely as discovering that i’m actually a lost fairy princess, but all the same.