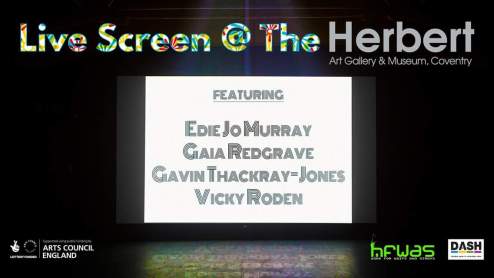 The Heimlich Session was a three hour durational performance commissioned by Home for Waifs and Strays with support from The Herbert Gallery, Coventry, Arts Council England and DASH Disability Arts.

A joyous sonic celebration of the other, the odd and the unusual.

There have been several periods where, for various reasons, I felt uncomfortable leaving the house. During these times I often found online forums (including spaced-out.com & blueblood.net) to be my connection to some form of community where my fears of being perceived as an oddball, weirdo or freak were pacified.

Subsequent therapy sessions focused not on fixing what was wrong with me, but of accepting that I was alright. Eccentric, certainly. Queer, definitely. But no more flawed than anybody else. And absolutely not fundamentally defective as a human being.

So in celebration of the peculiar in us all, I performed a 3 hour set based on the teenagers tendency to play guitar in their bedrooms for hours, making band names based on forum conversations all those years ago. Including costume changes, ukuleles, electric fiddles, and acapella classics the running order included:

The setlist for all acts included:

The video of the performance is viewable below, and the Lyrics and suggested chords are available here: V_RodenLiveScreenLyricsWeb